What, me again!  Hope you all had a fantastic weekend!  Last post, I mentioned a little holiday away.  Wanting to soak up some local atmosphere, the mister and I chose to forgo the usual hotel breakfast.  We stepped out for a robust walk each morning, ending up at a small chatter filled coffee shop redolent with the aroma of freshly baked croissants and just ground coffee beans.  Tourists and locals, cyclists and joggers, moms with tots, moms and pops, all coming together, either sharing a table, or cozied up a deux.  The food was grand, the atmosphere homey.  It was here that I stepped over to the wild side and ordered a London Fog Tea instead of my customary decaf soy latte.  We were on holiday after all, and what better time to break from routine.  Now, to be fair, I have had a London Fog before, but none so yummy as the one savored here.   I thought to myself, this could be my signature fall beverage. We’re like that in Vancouver…we seem to like to be identified by the coffee, or in this case, the tea that we drink.  Weird, I know.   A London Fog…Earl Grey tea, a hint of lavender, and sweetened steamed soy milk…what could be better.  After returning home,  I decided to make just this cuppa.  I googled London Fog Tea, because that’s what you do nowadays.  Seriously, don’t you google anything and everything?  Surprisingly, or maybe not, the drink originated in Vancouver, Canada.  The official ingredients are Earl Grey Tea, steamed milk, and vanilla syrup.  Huh?  Vanilla syrup you say?  Okay, well fair enough.  I’ll make mine with a little organic honey instead of vanilla syrup.  I boiled the water, made up a sachet of Earl Grey tea, steeped the tea, and added steamed soy milk sweetened with a dollop of local honey.  And this where my little story goes sideways.  I won’t say it didn’t taste yummy…actually, you know what…I will say it didn’t taste yummy. Okay. It tasted just okay.  It tasted like tea with soy milk and a bit of honey in it.  Big whoop.  So not.  Was it all kinds of goodness and magic like the one I had while on holiday?  Nuh-uh!  Out of curiosity, I added honey until my tea tasted all kinds of goodness and magic, and let me tell you, that was one whole lotta honey I added.  Yikes!  So, suffice to say, I won’t be having a daily London Fog.  The experience, or experiment as it turned out to be, reminded me of an earlier addiction to love affair with  Starbucks Chai Tea Lattes.  After one tea latte, I was hooked.  I found all sorts of ways to connive the mister into popping out after dinner, only to end up at our local Stuckbars.  What happened?  Well, after a few months and a few thousand chai teas under my ever burgeoning belt, I learned that a tall, which is in fact rather small, had a whopping 41 grams of sugar in it.   Whoops!   The bright side?   I can feel gratitude that I caught on quicker this time, and of course, I can still indulge occasionally.  However, I’m just not sure how I’ll feel about you London Fog, the next time you’re set before me. Knowing that beneath your airy layer of foamed milk , therein lies a confection sweeter than sweet, is disconcerting.  I fear the attraction is lost, the spell has been broken.

Enough ramble…my outfit speaks early autumn for me.   Dressing Your Truth  type one readers…are you like me?   I’m like a kid in a candy store when shopping for spring and summer clothing.  However, finding fall and winter clothes that I love can feel like a bit of a challenge.   Here, I’m easing into seasonally appropriate long sleeves and pants, but still keeping my look animated and fun by combining stripes, polka dots and a paisley print scarf.

PS  I got my hair cut, and it feels so great!

Jann of Have A Daily Cup of Mrs. Olson for Share Your Cup Thursday
Bella of Citizen Rosebud for Shoe Shine
Patti of Not Dead Yet Style for Visible Monday 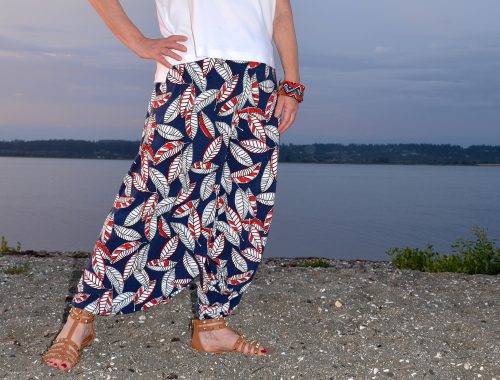 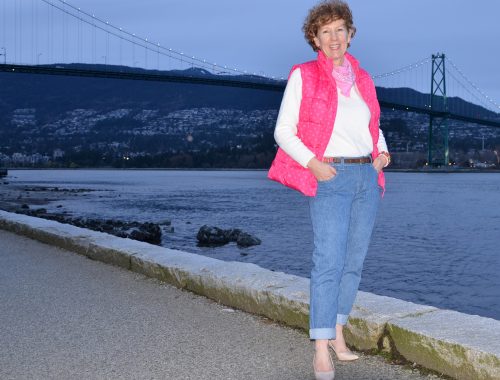 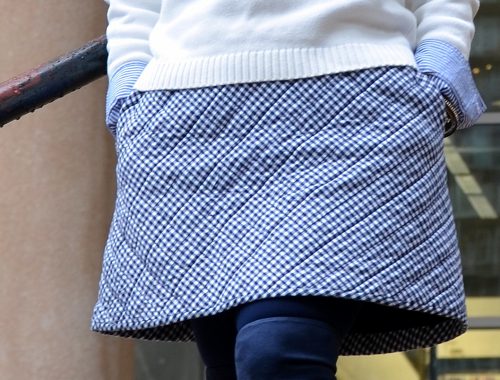 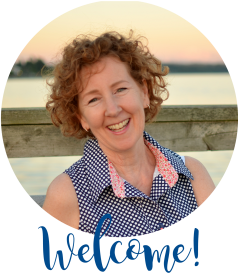